Ionous started this Expo with a lone epic map shot that will be part of the next Arcane Dimensions update, but later proceeded to give us updates and streaming from Map Jam 7 progress.   See discussion at func_msg forums.  The deadline is August 11. 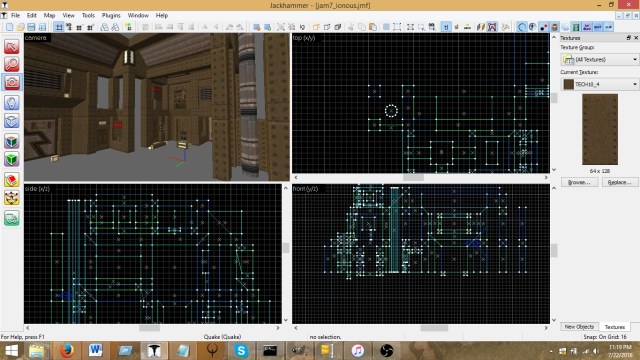 You think you have enough time to release these things every day, Nemo, but you just don’t!

Like the story for many of us, An Asset a Day joint-venture booth of The Happy Friar and PeeweeRotA is about what’s left after Real Life takes it’s big slice.  Maybe it depends on how we count…

So hey, not bad!  And this thing ain’t over yet.

A Bastion of Team Fortress

If you never heard of Attackers Go Red, here’s a brief intro:  Most know that Team Fortress is a class-based team mod, similar to CTF, but everyone has different skills and different jobs to do.  Attackers Go Red is a variation where Blue team is always on defense and Red team attacks.  It requires a high level of team coordination and is most interesting when there’s a bunch of players.  OneManClan has been keeping the faith and promoting The Weekly AGR Sessions, which is going strong enough to support another Saturday slot.  And mark Rock2ober on your calendar, a major AGR event held annually.  Check out the video:

Komagame shares a few in-progress Quake map screenshots with a unique elevated roadway concept.  Admittedly it looks like it could be a map for Quake 2, but we’re cool with that!  Just keep mapping.